What is Classical Music?

The dates of the classical period in Western music are generally accepted as being between about 1750 and 1820. However, the term classical music is used in a colloquial sense as a synonym for Western art music, which describes a variety of Western musical styles from the ninth century to the present, and especially from the sixteenth or seventeenth to the nineteenth. This article is about the specific period from 1730 to 1820.

The word "Classical", when used to describe a musical style, is used by popular culture to distinguish this kind of music from jazz, rock, or other contemporary styles.  The word "classical", however, actually is a period of time in Western Art Music that describes the music of Haydn, Mozart and early Beethoven, as well as other composers who lived at that time.  The general time designations are Renaissance, Baroque, Classical, Romantic, and Modern.  However, the term "Classical Music" has come to be known as a term for a genre of music that spans the course of hundreds of years, including all the music from Palestrina to Stravinsky, to the current day.  Many people are unaware that Classical music is still being composed today, although it is far different than what was created several hundred years ago.
Indeed, Classical music greatly emphasized homophonic melodies, meaning that there was a single melody that all the instruments played, instead of the layered melodies of the Baroque period. This allowed for Classical pieces to be much more powerful, whereas Baroque pieces were just pretty in comparison.

What is Baroque Music?

Derived from the Portuguese barroco, or “oddly shaped pearl,” the term “baroque” has been widely used since the nineteenth century to describe the period in Western European art music from about 1600 to 1750. Comparing some of music history’s greatest masterpieces to a misshapen pearl might seem strange to us today, but to the nineteenth century critics who applied the term, the music of Bach and Handel’s era sounded overly ornamented and exaggerated. Having long since shed its derogatory connotations, “baroque” is now simply a convenient catch-all for one of the richest and most diverse periods in music history.

The art and architecture of the Baroque period reflects an often bizarre style characterized by ornamental decorations. Especially noted in churches, palaces and other buildings of the period is the profusion of worldly splendour apparent in grandiose designs and elaborate decorations.

The music of the period reflects the decorative art in the use of ornamentation to embroider melodies. Thick and complex polyphonic texture prevails in many composers works. A sense of drama and urgency is incorporated into in vocal forms such as the cantata, mass, opera, oratorio and passion, and in instrumental forms such as the concerto, concerto grosso, prelude, fugue, toccata sonata and suite. Vibrant rhythms and expressive dissonances heighten tension in many Baroque works.

Much of the Baroque keyboard music written for the harpsichord and clavichord was written in suites comprising separate dance pieces, changing in tempo and meter but maintaining key unity throughout. The suite (Italian: Partita, Sonata da Camera; German: Suite, Partita, Overture; French: Order, Suite; English: Lessons) consists of dances such as the allemande, courante, sarabande, gigue and others such as the gavotte, musette, bouree, minuet and pavane. Each dance movement is usually written in two sections called Binary form, and is generally performed with each section repeated. Other forms of keyboard music from the Baroque period are theme and variations, passacaglia, chaconne, invention, prelude, fugue, choral prelude, ricercare, fantasy, toccata and concerto.

Some general characteristics of Baroque Music are:

DYNAMICS:      Abrupt shifts from loud to soft - achieved by adding or subtracting instruments.

An overall characteristic of Baroque Music is that a single musical piece tended to project a single mood or expression of feeling.

Influence Of Humanism During The Renaissance Period Music Essay

The influence of Humanism during the Renaissance period gave an enormous impact on the development of western music, where the revival in the study of Greek and Latin literature took place that result in new styles of music composed. The word Humanism is derived from the fifteenth century Italian term called ‘umanista’, which may be referred to as a scholar or teacher. This includes professions in all divisions such as poetry and philosophy, and thus the gaining of those intellectual properties and knowledge was the main focus of the humanities studies. This intellectual expansion in culture and secular ideologies was the humanism influence that covered vast aspects of people’s perspectives towards their lives during the Renaissance. One of the areas that were certainly affected by Humanism was music, where towards the sixteenth century more and more composers saw music as artistic works rather than mathematics equations, and they should be consisted of individual expression and delight senses. These ideas were supported by humanists and scholars such as Pietro Bembo, who stood as a vital figure on explaining how important the use of sonority in words and also words within the whole phrase was. This greatly affected the way Renaissance composers chose the amount of balance between music and words and the way they interact with each other. Therefore this influence brought up a new dimension in music writing that resulted in a new vocal style, the madrigal. It was one of the most popular music styles of non-religious music in the sixteenth century, and it certainly depicted what the heart of humanism was. The poems that were taken into the use of composing madrigals were secular material that demonstrated human nature, such as love poems. Also the quality of life, living fully and human interests, which were all, part of the secular attitudes that dominated this genre of music. There are plenty of examples from the composers in the sixteenth century that wrote music in the style. 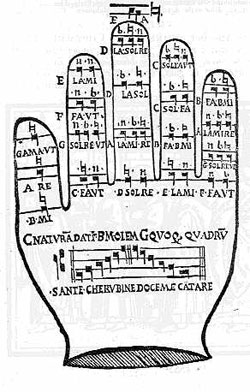 The creator of modern musical notation

Musician, lived between 990 and 1050. It is now accepted that he was born in Arezzo (and not in France or England or elsewhere). According to what he himself told of himself in two of his letters addressed to a brother Michael and Bishop Theobald, it seems that G.'s life can be divided into three epochs: in the first, his youth takes place in the monastery of Pomposa, near Ferrara, from where the envy and jealousy of brothers force him to move away; in the second he makes great journeys that, after a long absence, bring him back to Arezzo; in the last period, spent first in Arezzo, then in Rome, his reputation as a teacher spread throughout Italy. Giovanni xix calls him to himself and wants him to learn the way he has found to sulfur and suddenly read the music. Threatened and perhaps already tormented by malaria, G. leaves Rome, perhaps with the intention of returning to Pomposa; but since then every trace of him is lost. It is not possible to specify in which city and in which year he died.

1. on neumatic notation, where, giving absolute and definitive importance to the staff, determining the number of lines, giving equal meaning to the spaz and lines and using (as, f0rse, already began to do in the earlier times) the letters-keys and the colors yellow and red to indicate the different sounds of the scale. , he removed from the neumi all uncertainty of interpretation and any ambiguity of meaning, fixing exactly the intonation and making the musical notation of his times the basis of today's musical writing;

2. on the theory and practice of sulphur where, using the system of analogy, for which the sounds and intervals contained in a given melody (the anthem to St. John) are taken as a model to find the intonation of other sounds and intervals contained in the other melody, he accustomed the singers to distinguish and sing, without effort, the different intervals, and began a form of sulphur , based on the exaggerating scale and taking, then, wide and singular development (perhaps not in all responding to the intentions of G.), lasted no less than five centuries.


From this and the fact that the friar aretino cured, with singular attention, the development of the primitive medieval polyphony (the organum and the diaphony) preparing the not distant flowering of the form of the discanto, it is evident that G.'s work was, if not innovative, work of reordering, completion and simplification. But the rules set by G. other rules soon overlapped. From the application of the staff, key letters and colors arose a new form of musical writing derived directly from the neumatics, but of this more massive and square, from which then had to descend, after centuries, the modern round writing; and from the clear and simple system of analogy were born the new names of the notes (ut, re, mi, fa, sol, la) and the complicated exacordal system that had its practical demonstration in the use of the Guidonian Hand or Harmonic Hand and in the system of Mutations. How much of G.'s direct teaching in these amplifications has played cannot be established. It is to be believed that neither the invention of the hexachord system nor that of the new names of the notes are to be attributed to him.